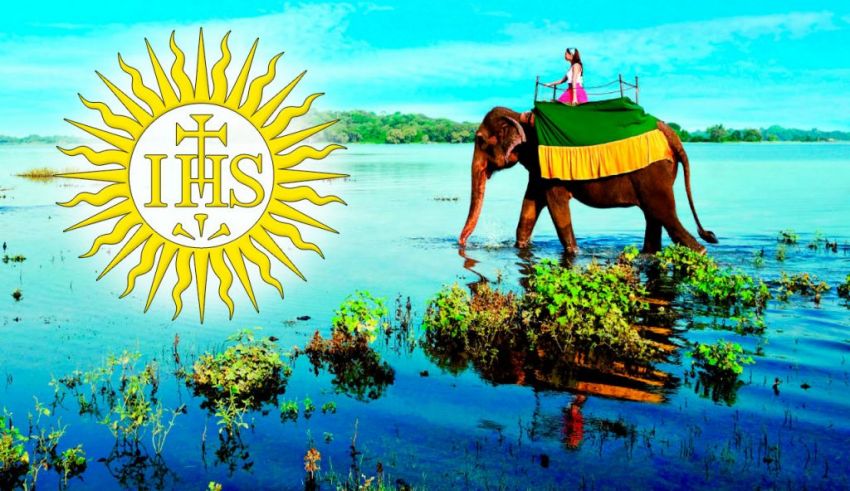 According to Fr S G Perera, a well-known Jesuit Historian in the Church of Sri Lanka, the first arrival of the Jesuits in the country, then known as Ceylon, goes back to the time of St Francis Xavier. First as a part of the Indian Province, in Mannar in 1561, which lasted until 1608, and subsequently in Colombo in 1602.

The second Jesuit era begins when in 1893 Pope Leo XIII founded the Papal Seminary in Kandy, Sri Lanka, entrusting its direction and administration to the Society of Jesus and also with the contemporaneous founding of the two dioceses of Trincomalee-Batticaloa and Galle.

The responsibility of administering the two newly founded dioceses was entrusted to the Society of Jesus and the two dioceses were manned by Jesuits from two independent European Provinces (Champagne-France and Belgian respectively). However, these two provinces, with the responsibility for the newly founded dioceses, opted for the same names to identify themselves, such as, the Jesuits of the Trincomalee-Batticaloa mission and the Jesuits of the Galle mission. These two mission provinces, though later exchanged their responsibility with two other provinces (New Orleans-USA and Naples-Italy respectively) of the Society of Jesus, were amalgamated into a Vice Province in 1962 which eventually became the Jesuit Province of Sri Lanka.

A message from the Ex General Curia

Dear Friends in the Lord,

With deep gratitude to the Lord I am happy to address you with a few words of thanks and encouragement as you begin the jubilee year of the Sri Lanka Province.

The fifty years long journey of Jesuits in Sri Lanka includes many moments to look back and savour with joyful memories the wonderful deeds the Lord has accomplished in and through Sri Lankan Province Jesuits. In small ways and in grand ways God has blessed Sri Lanka and the world through the actions of Sri Lankan Jesuits. However, we must be honest in admitting that these years have often included painful moments as well. Within its first ten years the Province lost its vibrant educational institutions. In more recent years issues stemming from diversity and ethnic conflict not only affected your life and work in the Province but resulted in repercussions in neighbouring countries and throughout the world. Yet you have not been overwhelmed by these challenges. Instead, taking to heart the example of the first companions, you have learned to be friends in the Lord. For just as the first French and Spanish Jesuits protected and cared. for each other as they travelled between rival armies in their journey from Paris to Rome, you have cared for and protected one another in the face of violence and hatred based on ethnic rivalries.

St. Ignatius and the first companions were convinced that it was the power of God that enabled them to overcome potential sources of division. In the deeply divided and war-torn Europe of the sixteenth century, they knew that only the Lord could bring them together and keep them together so they could become the Society of Jesus. They recognized that their companionship was not a human institution but a divine gift that emerged from their common desire to love and serve the Lord in all things. Let me then take this opportunity to thank you for all the ways you have imitated the founders of our Society in overcoming ethnic division and conflict. Your example is important for every member of the Society as each of us learns more deeply some of the key truths underlined for us at General Congregation 35: “Despite the differences, what unites us as Jesuits is Christ and the desire to serve him” (GC 35, D/2, no: 2); “We Jesuits, then fmd our identity not alone but in companionship” (GC 35, D/2, no: 3).

While thanking you for all that you have allowed the Lord to work in you and through you during the past fifty years, I also want to encourage you as the Province prepares to make the Spiritual Exercises according to the 19th Annotation, beginning with the Advent of 2011 and ending with Pentecost in 2012. I pray that this will be a grace-filled time for you to examine and intensify your commitment to the Lord and to one another. Let me urge you to imbibe deeply the spirit at the core of our way of proceeding so that the inner law of charity that St. Ignatius describes so often in the Constitutions may become an ever more spontaneous expression of your lives of dedicated service.

Although the Sri Lanka Province may be small in size and numbers, throughout the universal Society, especially in Asia Pacific and in South Asia, you are known as men who are friendly and exuberant. I pray that your golden jubilee year may be a time for appreciating how much God has blessed you in all the experiences that have made you a friendly and exuberant apostolic body that proclaims in word and deed the love of God that has been given to us in Christ Jesus the Lord. May the Lord bless you during this jubilee and all the years to come.

Sincerely yours in Christ,

A message from the provincial of Sri Lanka

The Sri Lanka Jesuit Province completes 50 years as a Province on 15th August 2012 and the Pakistan mission too completes 50 years of Jesuit presence in October 2011. On this memorable occasion this new web-page is inaugurated to keep all those interested and involved in our mission informed about us Jesuits and about those whom we serve. During these past 50 years many a stalwarts have laboured in this field serving tirelessly this land and our people. It is incumbent on us to carry forward their inspiration and nature the seeds they have sown to bring into fruition.

In these pages you will not only find the information about us and our mission that you are searching for but also challenges and opportunities for you too to join the mission according to your capacity or to assist us in different ways. Please send us your comments, reactions and responses. We wait for you to visit us.